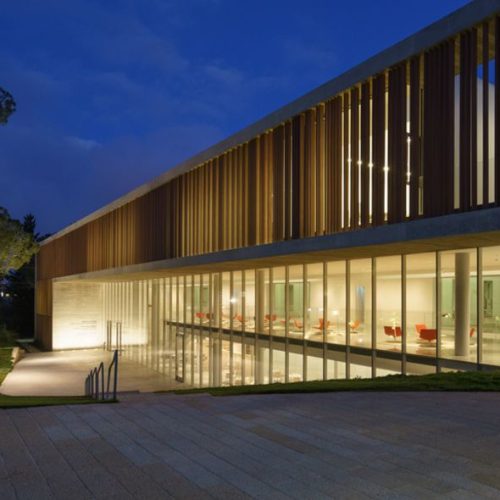 WoodN Industries sunshades characterize the face of the Polonsky Academy for Advanced Study in the Humanities and Social Sciences, located in the very heart of the capital.

The Talbiya district is one of the most upscale areas of Jerusalem. Set amid rolling hills and luxuriant well-tended greenery, this residential area is home to the dwelling of the Israeli President, prestigious cultural buildings, such as the Jerusalem Theatre and some of the country’s major academic institutions. One such center is the Van Leer Institute, which completed its campus in 2013 with the creation of the Polonsky Academy of Advanced Studies.

The initial objective of the project (funded by Dr. Polonsky) was to support about thirty postdoctoral fellows, some of whom were foreigners. However, the Polonsky Academy’s 7,200 sqm building offers much more than just 30 bedrooms. Walking through its 4 floors we find 5 seminar rooms, an advanced academic library, a canteen for the entire campus, a 145-seat auditorium, a multi-functional hall for events and conferences, administrative offices, a gym and glistening foyers perfect for any type of meeting.

Structural functionality criteria were not the only element taken into consideration when choosing which architectural studio the project would be entrusted to. In fact, the requests set out in the tender were: complete accessibility to the other areas of the campus; an open, elegant and welcoming design; the preservation of the distinctive architectural style of the campus and its skyline; full aesthetic and architectural compatibility with the Talbiya district; compliance with the principles of “green construction”.

This is why the project by Chyutin Architects beat the competition of even the most famous names in architecture in Israel. And that’s why the studio turned to WoodN Industries for the façade sunshades. Featuring a brushed finish in the color Cuba, the JF18041 sunshades used for the Polonsky Academy lighten the great volumetric impact of the building. WoodN Industries composite wood sunshades are also completely eco-friendly, formaldehyde free and offer record-breaking dimensional stability, impermeability, resistance to fire and parasites and lightness.

Thanks in part to the contribution of WoodN Industries, the headquarters of the Polonsky Academy for Advanced Study in the Humanities and Social Sciences has received distinguished awards. The building won the 2015 Design Prise in the Public Buildings and Architectural Lighting category and was included in the ranking of the most popular projects by Archilovers, selected from over 50,000 rivals. 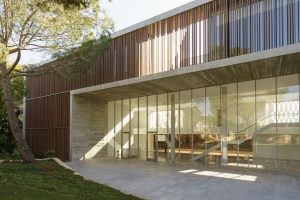